Robert and I have been so lucky with Jace as our first little monkey. Since day one he has always been such a great sleeper and once we got him on a schedule he was stuck on it!

Since we brought Jace home from the hospital we always implemented a bed time routine. We did not put him on a “routine” to be mean but we put him on it so he could be happy during the day due to being properly rested at night, and so he knew when we were putting him to bed that it was bed time. Now, he is just about eighteen months, and as soon as he hears us say “tubby time” he knows its just about time to go to bed. Now, don’t get me wrong our monkey can of course show his monkey side to him and cause a bit of a ruckus, because what kid wants to go to bed when they can play with their toys all night… right!?

Since Robert and I both work Monday-Friday Jace wakes up fairly early in the morning and because of this we put him to bed around 7:30pm so he is always well rested during the day, which I swear is why he is such a happy kid a good majority of the time. Since we have had Jace on a bed time routine for most of his life – however, it has obviously been adjusted as he gets older – he actually is tired at his bed time and because of this we barely ever have to battle with him to get to sleep.

Around 7:00pm is when we let Jace know it is “tubby time” and we clean up all his toys with him (generally singing the “clean up” song- one of his favourites!). To make it fun, we do little exciting things through out his routine so getting ready for bed isn’t such a bore for him. We put him into the bath and play with all his bath toys, when we start washing him he loves when we put a bit of the soap on his hand so he can rub his belly. He is growing his little independence already which is so great, but at the same time it really breaks this mama’s heart because he is just growing up way to quick!

We usually brush his teeth while he is in the tub and we ask to see all those sugar bugs – sometimes he opens up and goes “AHHH!” but again, he is a typical little boy and sometimes he just doesn’t want us to see his teeth which makes teeth brushing interesting!

Once he is out of the tub I give him his nightly massage with baby oil and put him into his PJ’s. He has always loved getting his nightly massage as this is something I have done since he was a newborn and it relaxes him right before we tuck him into bed. After we have him all ready for bed, and when Robert or I get his sippy cup of milk for bed time, he says good night to everything thing in the house while waving – he starts in the living room to say good night to his Hug Me Elmo, says good night to what ever was on TV that night (usually Wiggles, Cars, or Blues Clues), says good night to the dogs, the fish, the pictures on the wall, and anything else he would like to say good night to – then we tuck him snug into bed. His nightly tuck in with Robert that he must have is something they call “super tucks” – it is not time for bed until Daddy does his “super tucks”!

We really try to make bed time fun for him so that when he goes to bed he is happy and all worn out. How do you make bed time fun for your littles?! I would love to hear – comment, send me a message through the “contact me” page, or check out my Instagram “adventuresofthegroots” and personal message me there.

Since bed time routine was Mommy and Jace time tonight this mama is pooped out and is ready for some peppermint tea! Stay tuned for some more struggles, chaos & fun from this Mediocre Mommy! ❤ 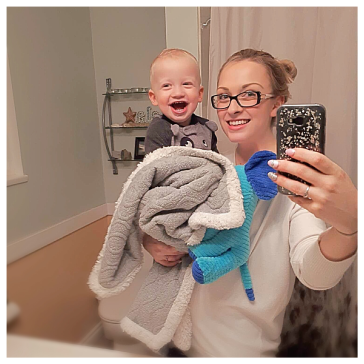